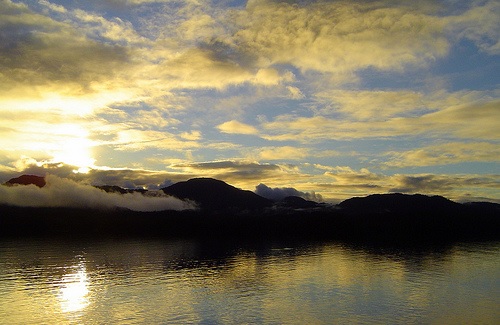 For some of us, a sun-drenched holiday destination simply will not do.

We want a trip that changes our perspective and makes us think differently about our place in the world.

This northern-most American state is home to a mere 736,732 people and only around 20 per cent of it is passable by road. It’s also not directly connected to the lower 48 states in the US and you’ll still need a US Visa to visit.

It’s the perfect get-away-from-it-all destination with a whole load of adrenaline pumping wilderness thrown in.

In fact, Alaska is a world apart. From the towering peak of Mount McKinley to the frozen rim of Glacier Bay, this untamed land is wild in the extreme.

Grizzly and black bears can be seen picnicking along the roadside on butter yellow dandelions, moose meander down busy main streets oblivious to the bustle of tourists and traffic, and huge pods of Humpback Whales provide offshore entertainment as they gorge on their seafood feast.

As if that wasn’t enough, the town of Haines boasts the highest population of Bald Eagles anywhere in the world. Watch them hunting salmon in Alaska’s icy rivers during the autumn.

But Alaska is not just picture postcard spectacular. It’s also the backdrop for a rich seam of American social history. Cries of “Gold in the Yukon” echo from the steep canyons of Skagway, the gateway to the Klondike and an original frontier town.

Here, you can learn all about the gold rush that began in 1897 when that precious metal was discovered in the Klondike and hundreds of thousands of prospectors stampeded to the north.

Around one hundred buildings from that era still stand and there’s a cemetery where hundreds of fortune-hunters, who perished during the arduous journey, are buried.

Panning for gold these days may prove fruitless, but if fortune seeking is on your itinerary look no further than the island of Atka where one of the most remote casinos in the world plies its trade.

You can play slots and a few table games at Atka Ira Hotel, although there’s not a lot in the town (population 95) to spend your winnings on!

Getting around Alaska’s vast mass is quite a feat and many tourists opt for a cruise to take in some of the state’s 34,000-mile coastline. Unusually, you’re in almost constant sight of land with fjords, inlets and glaciers rising up from the shore all around you.

But missing out on inland Alaska is to miss out its heart.

Mount McKinley rises up 20,320 feet above sea level and is North America’s tallest mountain. But even if its spectacular peaks are shrouded in mist on the day of your visit, you can still leave Alaska awestruck. Of the 20 highest peaks in the USA, 17 of them are in Alaska.

It would be a holiday that you would never forget for several reasons. So, what are you waiting for? Alaska will not disappoint.